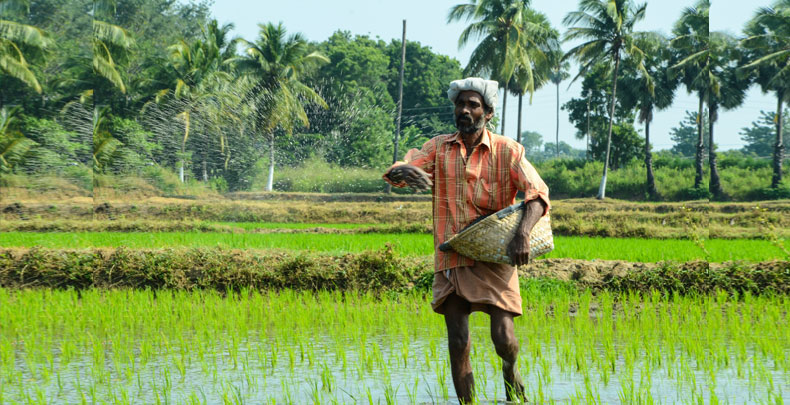 With the objective to create a unified national agricultural market for reducing various agricultural costs such as intermediation and wastages, and to benefit the farmers and the consumers, in April 2016, the Government of India (GoI) launched an electronic National Agriculture Market (eNAM) scheme. The program started with an initial budget of INR 200 crore for two years period and offered a one-time grant of INR 30 lakhs (further increased to INR 75 lakhs in 2017-18 budget), to every mandi joining the NAM platform. There were three key preconditions for the states to join the NAM platform:

But, satisfying these pre-conditions came with some requirements for reforms in the Agricultural Produce Market Committee (APMC) Act and so, rightfully, the GoI rolled out the Agricultural Produce and Livestock Marketing (Promotion and Facilitation) Act (APLM, 2017). With the new act, the focus took a shift from regulation (under APMC), to promotion and facilitation (under APLM), thus setting a strong foundation for agro-marketing reforms. 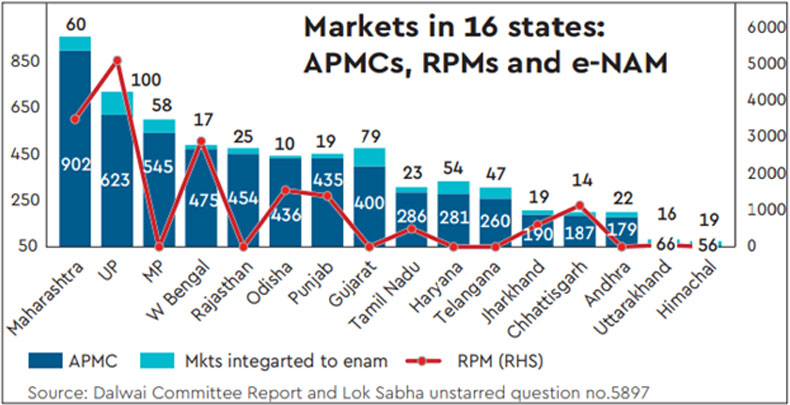 Observations by the department of agriculture cooperation and farmers welfare

The department of agriculture cooperation and farmers welfare identified that most of the agri-products reported transactions were intra-mandi. Inter-mandi and inter-state trading on the platform were minimal. This means that the states on e-NAM were not providing farmers information about better price discoveries across other mandis of the same state or from other states. Also, no state was allowing interstate trading under e-NAM and to the surprise of many states such as Uttar Pradesh was not even permitting trading between any two districts from the state on the e-NAM platform. The department also admitted that the e-payment facility was not available at most mandis, and there was no competitive bidding reported in many states. This pointed towards the ‘monopoly’ of the APMCs across all states and UTs, and the objective of creating a robust unified e-NAM with an efficient price discovery mechanism was looking like an unlikely vision.

E-NAM and the quest for a unified market

E-NAM portal was developed with the aim to connect the APMCs across the country to create a unified national market for all agricultural products. As most states agri-marketing was governed by the agri-marketing regulations of the states, every state had its own market zones which were governed by APMCs. Each APMC had its set of rules that even included the trading fees. Therefore, going by the number of markets across the country, the number of rules, the variety in fees, traders were finding it very difficult to navigate through them. e-NAM was developed to address the existing concerns by creating a single unified marketplace. Before going for a pan-Indian integration, the government launched it as a single state license so that all agri-markets within a state can be integrated and trading can happen across the APMCs seamlessly. 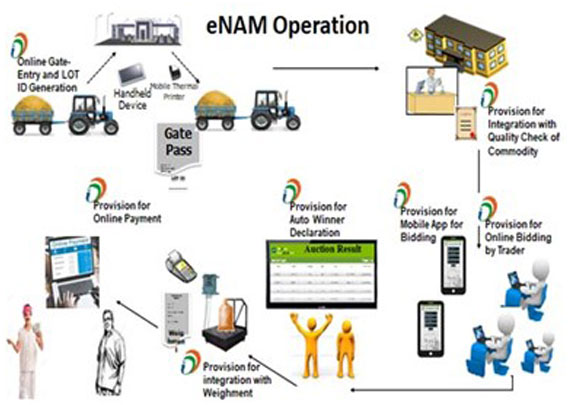 Even though, there may not be a single way to make states respond to the central government reforms with firmness, one of the best ways as suggested by the Dalwai committee could be to bring agricultural marketing under the concurrent list from the state list so that the GoI can have a greater say in the affairs. Marketing of Agro-products, unlike their farming, is not dependent on geographic silos and, hence, requires a more centralized focus. Based on the committee’s recommendation, the Centre has already prepared the Model Agricultural Produce and Livestock Marketing (APLM) Rules, 2017, and placed it before the states. The Model Act focused on post-production activities and aimed at doing away with the fragmented approach to agri-marketing which has been suppressing farmers’ income for decades.

Further in 2018, GoI rebooted the e-NAM to engage more farmers on the platform by unveiling unified mobile payment interface facility BHIM and started providing the features in regional languages such as Gujarati, Telugu, Bengali, Marathi, Tamil, and Odia apart from the two existing languages Hindi and English languages.

The e-NAM was strengthened with the addition of several features such as an MIS dashboard for better analysis, mobile payment facilities, a mobile app for gate entry and payment, integration of farmer’s database and an e-learning module. Besides making the e-NAM mobile app multilingual, the government also introduced a facility for mandi operators to carry out one of the critical operations of ‘Gate Entry’ directly from the app. The app enabled farmers to see the real-time bidding progress and to assess certificates through the app. Even buyers on e-NAM were allowed to make online payments from the app through their debit cards and net banking facility. SMS alerts are sent to farmers on receiving the payments in their bank account. A ‘grievance redressal system’ was setup at every mandi to flag issues related to portal or software and its operation and also to track online the status of redressal process. Moreover, the website was improved with more informative features such as the live status of markets of e-NAM based on gate entry, the latest information on events, dynamic training calendar, etc.

E-Learning module in Hindi was also incorporated in the website to give the latest learning to the various stakeholders on how to operate the system and continuously get trained at their convenience. The MIS dashboard was introduced to get better insight into the performance of each mandi in terms of trade and arrivals. The electronic dashboard helps the Mandi Board officials and APMC Secretary in comparing the performance of each mandi on a daily, weekly, monthly/quarterly and year-on-year basis. Thus, eNAM is a game changer in the area of online trading of agri-producs.