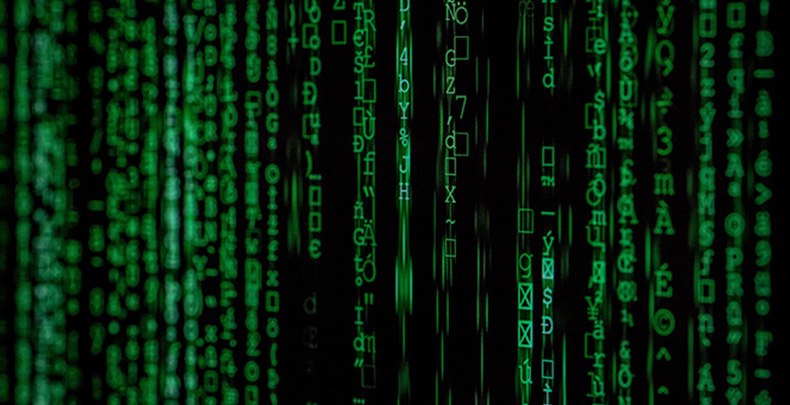 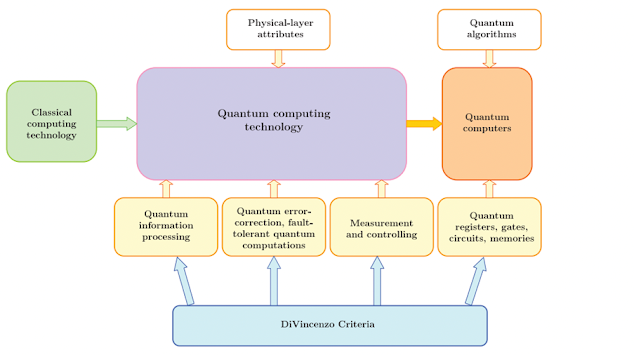 From the functional point of view, Quantum computers integrate several different elements such elements are almost like traditional functional ones (registers, gates, memories, buses, CPUs, storage devices), but the structures of classical and quantum devices are fundamentally different within the physical layer. The quantum operations are applied on quantum registers in a quantum computational framework. In the quantum register, quantum states formulate quantum superposition, while during a quantum circuit, the quantum states are entangled. This causes a fundamentally different system characteristic than what is present during a traditional computer. Besides these, quantum hardware restrictions like the no-cloning theorem also require different circuit design technologies since a quantum state cannot be simultaneously present in additional than one quantum gate. It has reversible quantum gates which perform a unitary operation on the quantum systems. Currently, we’ve only a couple of quantum computer devices during a laboratory environment that works. However, several new fields and interesting results have recently emerged which will significantly boost these developments. The large-scale quantum computers are realized during a distributed setting, where smaller quantum computers communicate with each other via a quantum bus. These physically large quantum computers also can be shrunken into small-sized devices via new technologies within the next few years.

Shor’s prime factorization algorithm is one of the most important quantum algorithms, and it also serves as a benchmark to characterize quantum computation performance. The prime factorization algorithm has been applied by different physical approaches with various conditions on the scalability level. Quantum teleportation, quantum Fourier transform, quantum key distribution, quantum communication protocols, and quantum error-correction methods – which are not computational problems, however – play a crucial role in the realization of distributed quantum computations. Their practical implementations are essential for any future experimental quantum computations, like the event of the quantum Internet. Some implemented quantum algorithms practically belong to the quantum machine learning field. Quantum programming languages are also a distinct field developed to appropriate programming languages for the quantum computer. 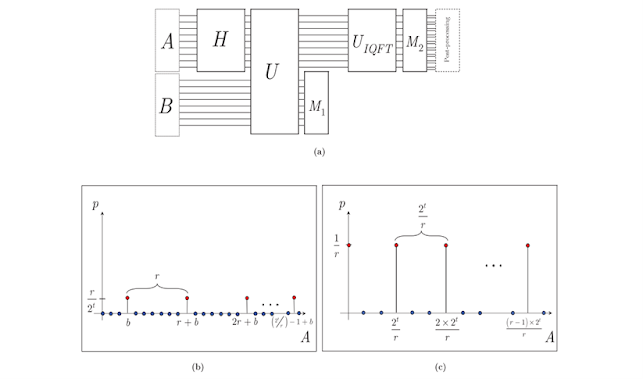 Fig. 2. The conceptual model of Shor’s prime factorization algorithm. (a) The quantum circuit of the factorization algorithm. It consists of two quantum registers: the first quantum register A (depicted by the dashed box) contains t qubits; the second quantum register B (dashed box) contains n qubits. First, the superposition of the qubits of register A is ready via the H Hadamard operation. Then, a unitary operation is applied that is required for the period-finding method. Next, the M1 measurement operator measures the qubits of register B. Afterward, a second unitary operation UIQFT, the inverse quantum Fourier transformation (IQFT), is applied on quantum register A. Finally, the qubits of A are measured by the M2 operator. (b) The state of register A after M1 but before UIQFT. (c) The state of register A after UIQFT. Before UIQFT, the p probabilities of the solutions (depicted by red dots) in A are low, p = r/2 t (the non-solutions are depicted by blue dots, and b is a constant), where r is the period. After UIQFT, the values of p are increased to p = 1/r. After the second measurement M2, some postprocessing steps (dashed box) need to determine r from the measurement result.

In February 2020, D-Wave Systems Inc., a quantum computing company, launched Leap-2, which is the first quantum cloud service designed for developers and organizations to easily build and deploy real-world hybrid quantum applications with practical impact. In March, researchers at the U.S. Army lab created a quantum sensor to detect communications over the whole frequency spectrum.

In October, IonQ announced its next-generation quantum computing system with 32 qubits and an expected quantum volume greater than four million. Quantum volume may be a measurement of the general power of a quantum machine. Later within the same month, the Accredited Standards Committee (ASC X9) issued a replacement standard for public-key cryptography use of digital signatures.

And last, China developed a quantum computer system called Jiuzhang which is reported to be 10 billion times faster than Google’s Sycamore. Using Gaussian boson sampling, he had captured 76 photons and achieved quantum supremacy. Overall, the newest advancements in quantum computing are some serious steps towards making it a billboard and scientific reality.

While quantum computing continues to garner billions of dollars of investment across the world, within the recent coming years, it is going to be available as a cloud service. Not only that, but quantum computing can become an integral part of data analytics.

As per the predictions by IDC, 25% of Fortune 500 companies will gain a competitive advantage from quantum computing by 2023. IBM has plans to deliver a quantum computer with a 1,121-qubit processor (codenamed Condor), inside a 10-foot tall “super-fridge” which will be online and capable of delivering a Quantum Advantage, by 2023. The Goldeneye fridge is currently in prototype and is meant to be capable of hosting multiple chips. IBM hinted that such super-fridges will ultimately be capable of stacking multiple chips providing many internally networked qubits.

The advantage of Quantum computing is in performing certain frequent information science tasks more efficiently or cost-effectively compared to a standard system.