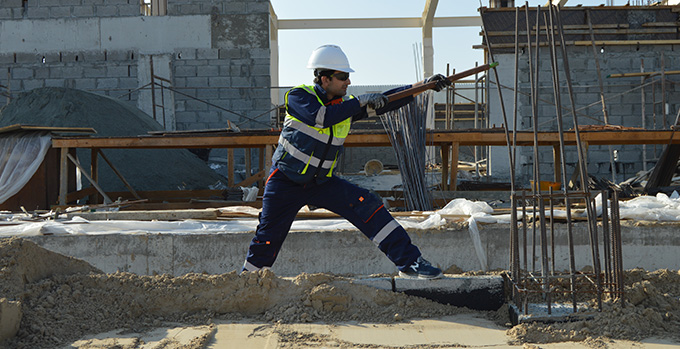 The first-ever concrete produced dates back to 2650 BC by Imhotep – a great Architect, Chemist and Doctor. He dissolved caustic soda in water and the solution was mixed with locally available flaky limestone and white clay (called Kaolin). This mixture gets hardened after 30 days of exposure to sun heat and attained the compressive strength of 25 to 40 Mpa. Caustic soda was produced when burnt lime was mixed with sodium carbonate from Natron a place in Egypt, that is the reason even today Sodium is symbolised as Na. This ancient concrete needed heat to attain strength while modern concrete needs water to attain strength.

Construction of buildings around us happens using varieties of materials depending on the purpose and location of the building. Traditional construction materials like bricks, timber, stone, lime, clay tiles have been in use for many centuries and dominated many civilizations right from the Vedic period. The cement was invented during the early 1850s and has been in construction and now it’s being the most widely consumed material after water.

Concrete is a mixture of sand, small stone pieces (from granite rocks), water and cement. Cement and concrete have now become an integral part of almost all constructions around the world. With the addition of steel, these concretes become Reinforced Cement Concrete and which in turn has become the modern construction composite. The consumption of these structural materials per capita around the world is quite interesting. It is observed that in most of the constructions nearly 2 to 3% of steel from gross concrete volume is sufficient to build any structure.

Concrete has great compressive strength, but it is equally weak in tension having nearly 10% of compressive strength. That is why many designers and IS Code 456-2000 ignore the tensile strength of concrete altogether and use steel to resist tension. When we pull a rope from both ends the rope is in tension and when a birthday cake is cut with a knife the cake is subjected to shear and when we crush groundnuts it is compression. Cement Concrete along with properly placed steel inside the concrete known as RCC has become a better composite for any type of structures subjected to massive loads like earthquake, tsunamis, explosions and blast loading.

In the private sector where large public construct their own houses the quality control on concrete production is very poor in India. Because most of the contractors in concrete building construction are from a non-technical background. Usually, the contractors will proportion the materials based on their experience by not going for structural design or not considering the grade of concrete given by the structural engineer. But it is not technically correct and there are many examples where the concrete buildings have failed because of the usage of under-strength concrete. It is estimated that 5% of air voids inside the concrete eat away simply 30% of the strength. Workers add more water to make it more fluid for their ease of lifting and placing. In any case, for 1 cement bag not more than 30 to 35 litres of water should be added.

The strength of concrete required for a project depends on the probability of the severe loads acting during their useful life. Nobody expected an aircraft will come and hit Twin Towers and explode inside. Structural Engineers have to forecast what failure loads may act on a structure during their entire life. The IS codes 875 and 1893 give detailed information about general loadings and earthquake loads to be considered for the design of any structures. After a complete analysis of the structure, one will arrive at the actual strength of concrete required.

Most people know the ingredients of concrete i.e., cement, sand, coarse aggregates (jelly) and water, but they are not sure about how much quantity of each should be used to produce desired concrete strength. The grades of concrete to be used in the construction may be different depending on the column spacing, depth of the beam, depth of the slab, etc.  Though the construction is taken care of by the contractor, it is very important for every individual to know the proportioning of materials so that the quality of the building construction is maintained.

The higher grades of concrete must have to be designed carefully and the proportioning by volume batching shall be avoided.

Role of water in concrete:

Concrete should be mixed in such a consistency that the concrete can flow easily to the very tight spaces where heavy reinforcement present in the structural element known as workable concrete. The workable concrete can be obtained by increasing the water content in the concrete but using excess water will reduce the strength of concrete. Therefore, care must be taken while adding water to the concrete during mixing. However, for a proper grade of concrete, the water-cement ratio prescribed by the Indian Standard Code (IS: 10262) is recommended.

The curing of concrete is also equally important in obtaining the full strength of the concrete. But, what is curing and how many days we need to cure the concrete?

In the construction industry, the contractors are having a very bad practice of removing the formwork and the props on the very next day of casting of the concrete. Sometimes this practice will be very unsafe. The stripping time of concrete should be at least a time when the concrete gains strength to take up its own self weight with nominal accidental load. Indian Code 456-2000 suggests the following stripping time for formwork and the props based on the structural elements.

Modern concrete seriously lacks its life span. Many of the concretologists firmly believe that a structure well built under strict quality control and with a very good geometric sense can’t last more than a healthy man’s lifetime. One may live for 30 years and the other may live for 110 years depending on how their health is maintained. We do not a have feedback of concrete structure having more than 100 to 150 years. But, the Giza pyramid (of lime concrete) is more than 4500 years old. Indeed, now it is the time to reinvent the wheel.